The Bombay Canteen – A Desi Twist to the Tale

The Bombay Canteen – A Desi Twist to the Tale

Social media is a funny thing. Follow someone on Facebook or Instagram long enough and suddenly you feel like you’re their friend. You are witness to the meals they eat, the places they’ve been to and the things they hold dear. Meeting up is like reuniting with a long lost pal. Well, aside from the fact that they don’t really know who you are!

I kept having to remind myself of this false sense of intimacy on a recent trip to Bombay. I have been stalking (there really is no kinder word) the eponymous chefs of The Bombay Canteen – Floyd Cardoz (of Tabla, New York fame) and Thomas Zacharias (former executive chef of Olive Bar and Kitchen, Mumbai) for over a year now. Their Instagram feeds had hinted at a delicious collaboration for a while and it came as no surprise when they finally announced their plans to open The Bombay Canteen – their paean to sophisticated regional Indian cooking. The restaurant has been on my to-do list ever since it first opened its doors in February 2015 and its only last week, that the the stars finally aligned and I was set to meet my best friends over lunch there. All I had to do now was turn up and stop believing that Mr Zacharias and I were best buds 🙂 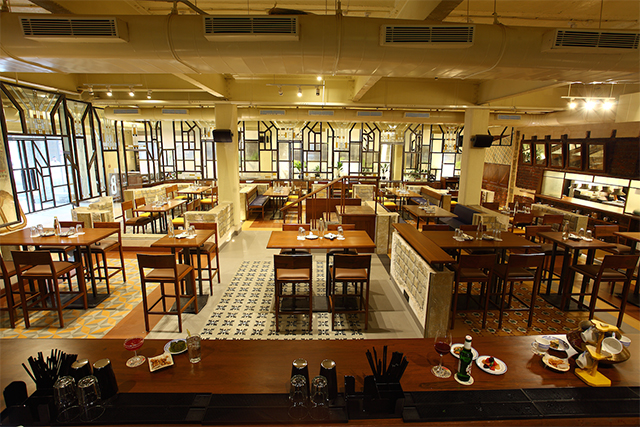 The hype the restaurant and its chefs have created is impressive. Friends in Bombay recount stories of reservations that have been turned down through the week (yes, even for weekday lunches!) and the buzzy market-place vibe created by its young and peppy staff. Situated at Kamala Mills, the surrounding concrete warehouse jungle does not hint at the warm decor that awaits you once you step into TBC. Designed to look like a club dining room, it’s all large art deco glass windows and screens and cozy leather booths. There are a few kitschy items thrown in and around the room like the row of stainless steel lunch boxes or the handcart with painted kettles but unlike other restaurants of late, it does not go overboard. A large wooden panelled bar stretches across one wall (very club bar-ish) and a little bakery counter in the corner mimics the Irani restaurants dotted all over Bombay. And yes, they even make their own version of mawa cakes, khari and ‘bourbon biscuits.’

The bar is reminiscent of gymkhana bar rooms

But let’s get down to the food. The menus were proffered with a flourish and the wait staff were milling around always at the ready to answer any queries or recommend a special.

School registers aka the menu

We started our meal with a round of cocktails. The Bombay Canteen prides itself on its innovative bar menu. Using a mix of local ingredients and high end liquor such a Beefeater gin with coriander and cucumber juice, or Absolut vodka with basil, ginger and pineapple. I went for the “Chai Chai Chai” – a refreshing mix of vodka, assam tea, mint leaves and a special masala mix. The others opted for tried and tested sangrias and beers.

Our drinks – Sangria, Chai Chai Chai and a melon and pomegranate mocktail

Starters of ‘chhota plates’ included TBC’s take on that old club favourite – Eggs Kejriwal, chicken kasundi bada pav sandwich and desi ‘tacos’ where pulled pork vindaloo was served on three methi (?) theplas. Out of all three dishes, the tacos were definitely a standout. The melt in the mouth piquant pork could have been served with anything actually and still been a winner. The theplas were almost incidental. Our tummies were still not satiated, so a plate of spiced chicken kaleji was added to the mix. It passed muster but was nothing to write home about. Supposedly the bheja fry is sublime and a must have but none of us were up to it that afternoon.

For the mains, we opted for the chicken ishtew pattice. The menu describes it as a ‘black pepper and cinnamon coconut chicken curry with crispy puff pastry.’ We were asked if we wanted it with the ‘purdah’ or not. Intrigued, we chose with and were not disappointed. Impressive to look at, a bowl of piping hot chicken stew covered in a blanked of buttery puff pastry arrived at our table.

Chicken ishtew with its purdah of puff pastry

Once we pierced the cover, a delicious aroma of chicken and spices was released. Sadly, however, the taste did not live up to the drama that preceded. Not bad but not amazingly good either, it felt just like an extra large chicken puff from our childhood. If that’s what the chefs were aiming for, they got that right at least.

The Canteen Tiffin Box is another item on the menu that has had its five minutes of fame on Instagram. Served in a stainless steel lunch box, your mains (in our case – kheema aloo) are served along with an unusually mushy sprouts salad, some papad chips and buttered pav. The kheema was delicious and it felt strangely comforting to be eating out of a dabba again. We wouldn’t have been the least bit surprised if a lunch bell had rung marking our return back to our classrooms 🙂

By now, we were stuffed. Aided by another round of cocktails, we almost didn’t order desserts or Sweet Dish as the menu proclaims. But I insisted. Hell, I had been seeing pictures of the masala chai popsicles and the Old Monk gulab jamun for months now. There was no way we were returning to Pune without having a taste. And if you are going to do something, you might as well do it well. Keeping that in mind, I ordered five desserts off the menu. The masala chai popsicles were reminiscent of a creamy kulfi with a hint of elaichi and cinnamon. Yum! The Old Monk gulab jamun was overpowering in both its size and sweetness. The custard apple trifle served in a cutting chai glass was light and. Actually, thats all I can say about it – it was light. There was another small dessert glass that was served to us as part of the tiffin box menu. Nobody told us what it was and we never did manage to figure it out either. Our best guess was baked yoghurt (?). The coffee rasgolla came with a delicious salted caramel ice cream and nut brittle. The ice cream was the redeeming feature for sure as the rosgollas were a bit of a hit and miss in our books.

Our entire meal came to a whopping 8k. For four people and for the amount we ate, I feel it was a bit over priced. At the end of the afternoon, it wasn’t the food that would remain in our memories but the company and the buzzy vibe of the place. Would I return to TBC? Maybe, to try out their evening chakna or snack menu along with a drink or two. Would I make the trip back only for the food? Doubtful. But then again, this is Bombay where everything goes and from what we saw, The Bombay Canteen is well on its way to achieving cult status.