About the author : stonemill

One of the best decisions I made before we left for Italy was to book a cooking class in Rome. I sifted through site after site online and had to choose between culinary academies promising nouvelle Italian cuisine, professional chefs who would guide me through the intricacies of handmade pasta and pizza, and true  blue Italian grandmas who would divulge ancient family recipes. I finally confirmed my seat for a one day course with Chef Andrea Consoli who ran a school called Cooking Classes in Rome.

You could learn to make pasta from scratch

In terms of cuisine, Italy is quite something else. Each of its 20 regions has a distinctive local diet with preferences and ways of cooking that have evolved through the centuries. Doing a cooking class in Rome would be completely different from doing one in Venice even though the menus on both may say pasta or pizza. It was an eye opener to see just how each region treated its produce and maximised its natural resources. But we are getting ahead of ourselves, this blog is about Rome and what I learned there.

I made my way to the picturesque neighbourhood of Trastevere where the cooking class was to be held. In a small red brick building where vines crept along the walls and window boxes of fresh flowers welcomed me, a small sign proclaimed that I was at the right place. A large dining table dominated the entrance / living room area and beyond was a compact little kitchen. There were 12 of us at the class that day – once again from all over the world. Some had even cooked with Chef Andrea before and were returning for seconds!

We soon discovered our menu for the day… Eggplant Parmigiana as an appetizer followed by Spaghetti Carbonara as the primi or first course. The second course was Meatballs in a Fresh Tomato Sauce accompanied by Roman Style Zucchini Blossoms with Cream. To end with we would feast on a Ricotta and Sour Cherry Pie. 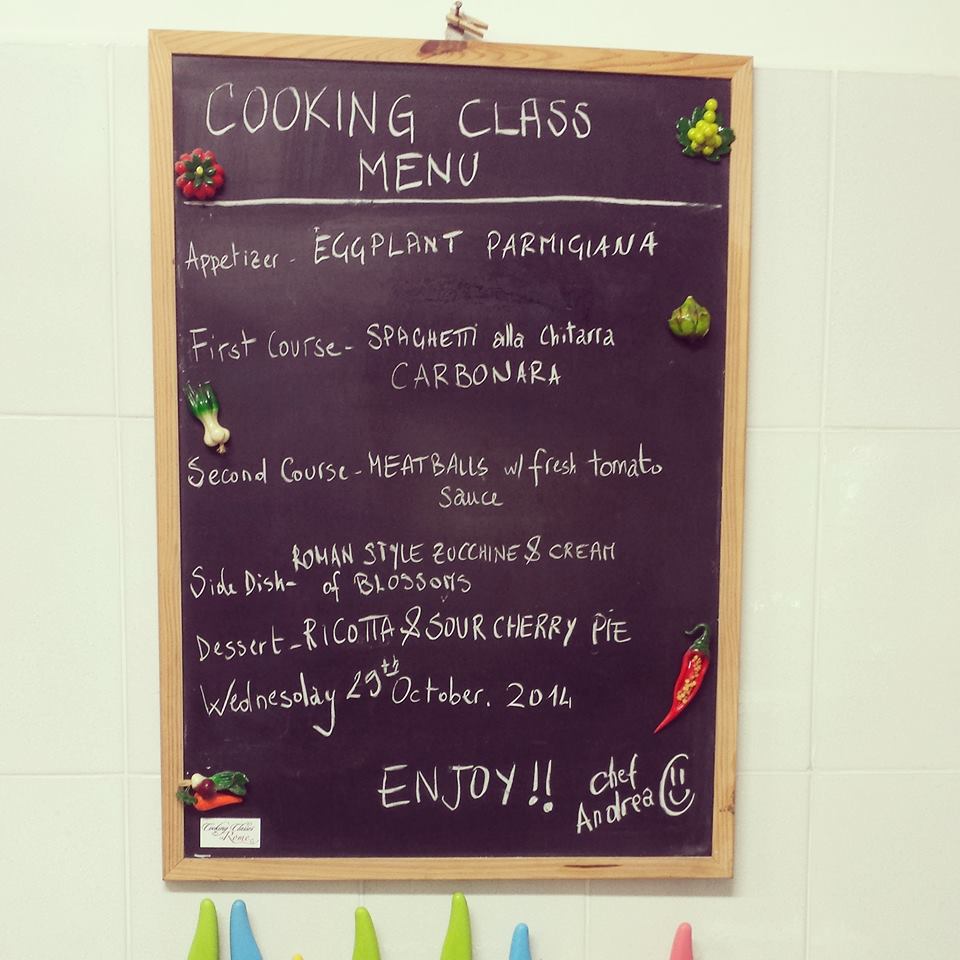 Yes.. we made and ate all of this!

This is all the fresh local produce that we started with. By the end of the day, there was nothing left on the table. Amazing!

Just look at these colours

Let’s start with our appetizer. Take my word for it when I tell you that you have never had eggplant or brinjal like this before. Its a simple, rustic recipe that calls for a few ingredients but ensure that each one is of the best quality before you begin cooking.

Salt and Pepper to taste

For a traditional Roman Eggplant Parmigiana, you slice the eggplants into thin roundels. This was winter eggplant so we didn’t have to salt the veggies first to remove the excess moisture but we can’t skip this step with the brinjal we have out here. Sprinkle a healthy handful of salt over the eggplant slices and keep aside for 15 to 20 minutes. Pat dry on a kitchen towel to remove any excess moisture.

You could use a mandolin slicer to get even rounds

Make the all purpose tomato sauce used in most Italian dishes. Heat some olive oil and sautee the fresh tomatoes, that are blanched and skinned and simmer for an hour with four cloves of garlic. Season to taste. 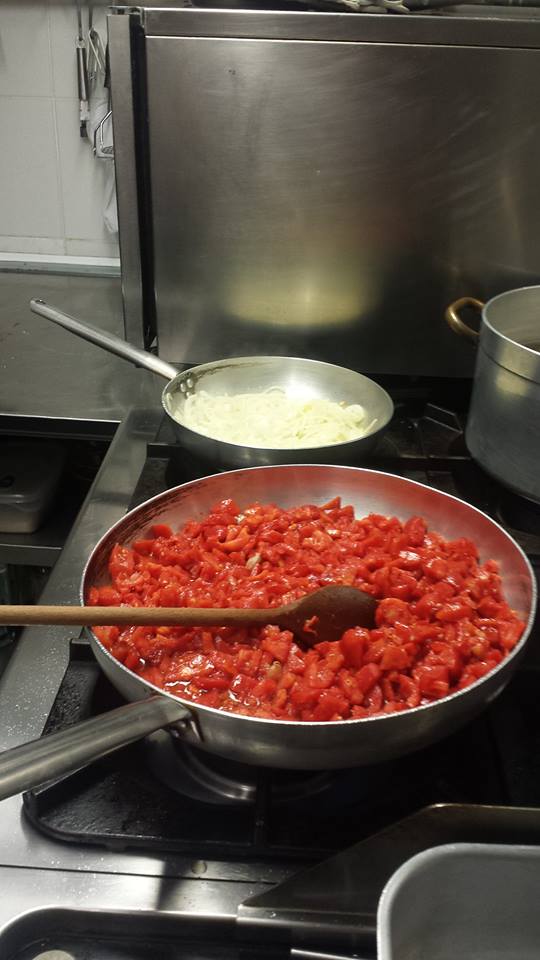 Cooking tomatoes on a simmer releases all the natural sweetness. Don’t rush this step

Deep fry the eggplant slices till crisp and then leave to drain on paper towels.

Assemble the Parmigiana by alternating slices of fried eggplant, fresh mozzarella, basil leaves and the tomato sauce. Sprinkle over with Pecorino or Parmesan cheese. Keep in mind this was a Michelin starred chef teaching us so his food plating was extra pretty. I would probably bake it all in one big casserole of goodness.

The fresher the ingredients, the tastier your dish

This is what each individual portion looked like once assembled.

Just before they were popped into the oven

Bake for 30 to 45 minutes until the cheese is bubbling and the eggplant is cooked through.

This is what the finished product looked like plated up. I can honestly say I have never had baingan like this ever before 🙂 🙂

This appetizer was only the the beginning of a long and luscious lunch ahead. After we made all the courses, we sat down to eat all our creations. By then, the ice had completely broken between all of us and the five different Italian wines served along with each dish only added to the enjoyment. If you do find yourself in Rome, do yourself a favour and sign up for one of these classes. And if you need any more reasons… here’s a picture of Chef Andrea 🙂