Dim Sum and Then Some More

Dim Sum and Then Some More

About the author : stonemill

It recently came to our attention that Royal China was offering a special unlimited dim sum menu during weekday lunch times. Say no more, we were in our car and on our way to try the place out within the week.

Located at the Westin Hotel in Mundhwa, Royal China is oddly placed at the end of a long verandah shared by the hotel’s flagship Italian restaurant – Prego. Follow the signs and you enter a surprisingly large room decorated in a typically “Chinese” fashion. But we were not here to critique the decor – it was the food that brought us here on a hot afternoon and by God, it was food that we were going to indulge in.

We were surprised to find out that there were several attractive meal offers on display. You could choose from an Executive Lunch that included soups, 3 starters, 3 mains and dessert for a a minimum of 2 people or a Lunch Special that offered soup, any 2 dim sum, 1 main course with rice or noodles and 1 dessert again for 2 people. While both were attractive offers priced at Rs. 750 per head, what really got our mouths watering was the All You Can Eat Banquet Lunch. For a mere Rs. 1095 plus taxes we could order anything we wanted off the a la carte and dim sum menu (barring some premium items such as king prawns, lobster, and crab). Fair enough we thought and we happily perused the menu.

The Dim Sum menu card was a separate little booklet and since we were not very conversant with the types of dumplings on offer, we left it to our waiter to recommend his favourites.

A wise decision indeed. After a wait of 15 minutes or so, small bamboo steam boxes and platters filled up all our available table space. Thankfully they came in small portions or two or three, which was great as we hate to see food go to waste. Since pictures speak a thousand words, here’s what we enjoyed –

Hands down our favourite was the prawn and chive dumpling. The translucent wrapping, the delicious chunks of prawn and the delicate taste of chives was addictive. So much so that we added another portion to our order. Our second favourite was the roast pork puff but since it was deep fried and we were already full up (!) we had to forgo a piece in favour of trying out more stuff from the menu. A decision I regret deeply as I write this and face my boring lunch at home. *deep sigh*

Already replete after our dim sum extravaganza, we decided to go very light on the mains. While we were dying to try out the crispy seaweed and the soups (yes, all included in the package), we compromised and chose wasabi prawns and a portion of spicy fried rice. 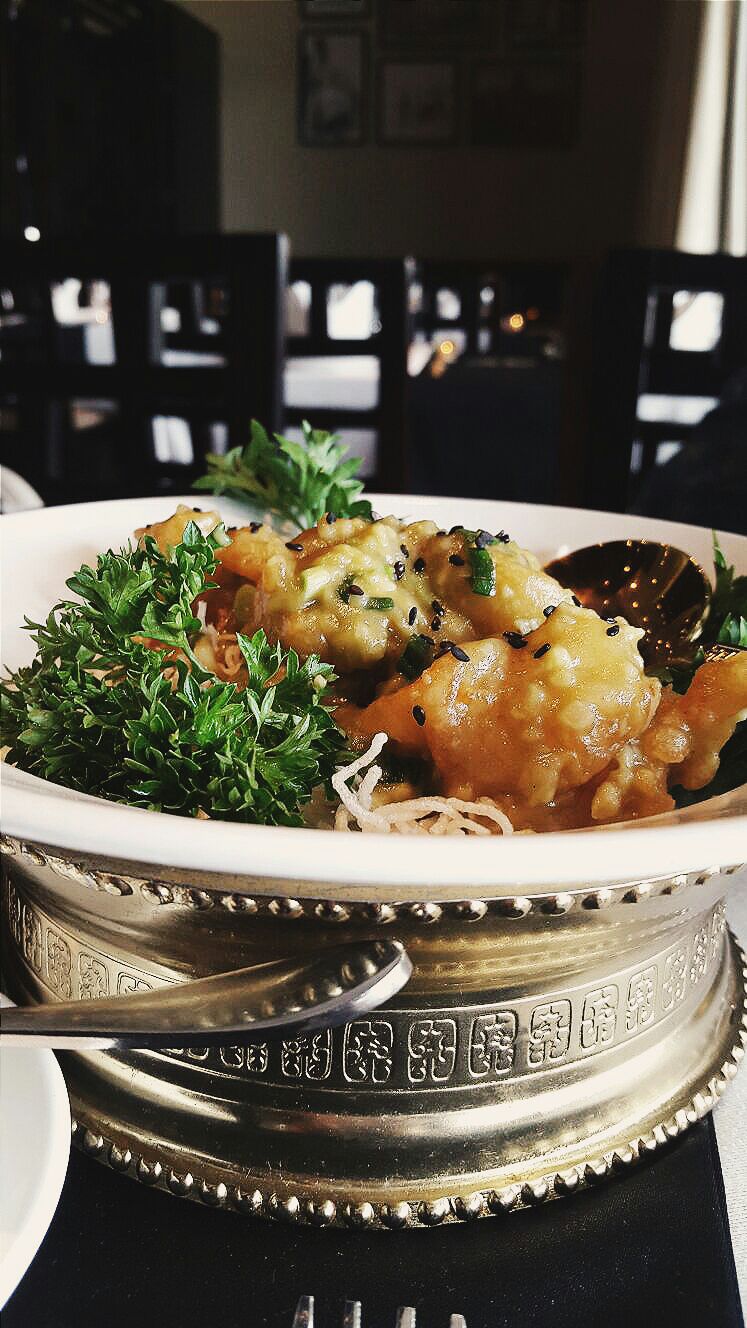 The prawns were succulent and large but the wasabi sauce was a bit too cloying and heavy on the mayonnaise for our liking. It would have been better to just have them as golden fried prawns with a wasabi mayo dip in our opinion. The fried rice was fine. Chock full of shrimp and chicken and sliced chillies. Not something I would order again but a more than adequate accompaniment to our main course.

As I moaned and groaned and swore never to eat another morsel again, my daughter went ahead and ordered the chilled mango pudding for dessert. And thank God that she did. A perfectly delightful, light and flavoursome end to a great great meal. 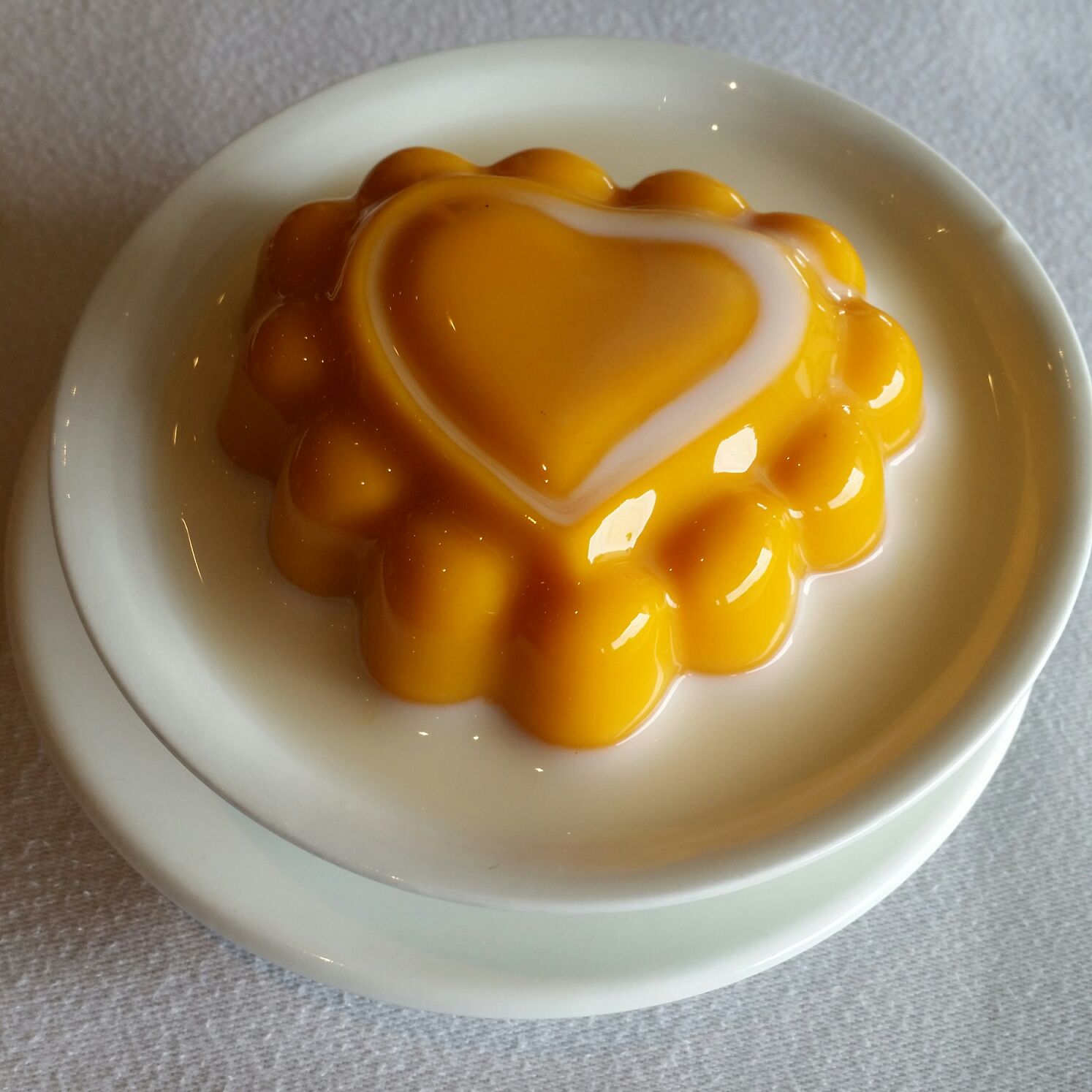 Ps: Note to those custard filled buns with ice cream on the dessert menu –  we will be back for you.

What a lovely way to spend a lazy afternoon

Our bill came to close to Rs. 3000 what with the VAT, taxes and service charge but we still felt that it was a bargain! Considering that most items on the menu were priced at Rs. 500 and above, for the amount we had eaten, this was true value for money. The All You Can Eat Banquet menu is available Monday to Thursday for dinner and all seven days of the week for lunch. We already know when we are going next!